Rode with Jason today. After two weeks of no riding, then two days in a row of actually being on the bike, I was kind of tired. That's cool, it felt good. Jason apparently was tired too, he wanted to stop and put the stretching station to use. 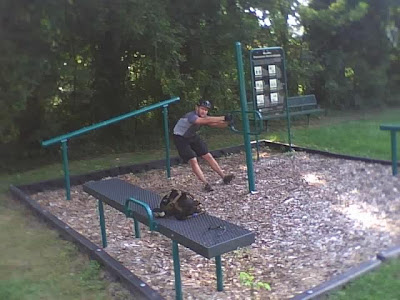 I did a little stretching as well, but was too lazy to get off the bike. 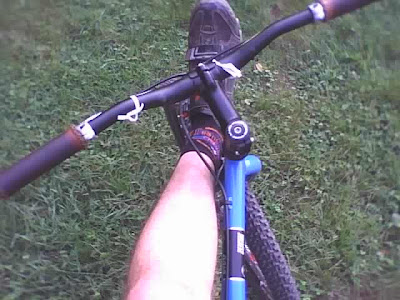 Trails are in great shape right now, thanks to all the guys that have been hitting them with the gas power tools. I know Randy and Craig have been out there sweating and grooving with the trimmers. Thanks again guys.

Speaking of Craig, I been hearing he's fast these days. Pretty exciting to see some of the fast guys coming out of hiding this year. First I've seen of it since I moved here. Keep riding guys, it's great to see the rides rockin' and rollin'.

Oh yeah, here's one of Randy giving the two ball salute before the Landahl race. Looks like we got a money shot of Shawn in this one too. How often do you get a gem like this to post on a blog? Sorry guys.... Get one of me like this, and I fully expect for it to be posted the next day! 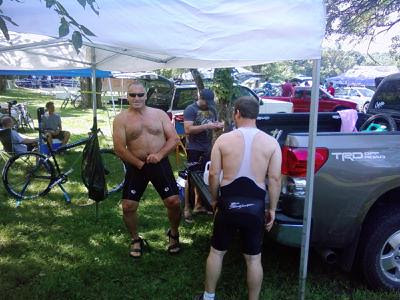 Randy and Craig Hoppe Trimmed Corby South and the Missionaries from my church trimmed Part of North today and will finish more soon. If I could have an informal count of who plans to guide or ride the mtb tours for the 6&7th please comment on this post. We might even get some KC people up for this. We have camping in the race field for the entire weekend. What does everyone want to do? I propose a big cookout with dogs and everything for all the mtb crew in stj. Make that a potluck because I'm poor, later in the afternoon then maybe a ride-night ride and just hang out to celebrate all the hard work we have done this year to put STJ on the MTB map. Maybe a fun bike skills challenge thrown in there somewhere. Sean from the Conservation Dept. will be leading a tour to Sun Bridge to promote the reopening of that area to biking. and don't forget the swap meet Sat. and Sun. at the civic park. Marin has donated a Hamilton 29 single to the Mark Reynolds fund to be raffled, only $5 a ticket to get a chance to win a sweat 29er.
Posted by shawncforce at 9:36 PM 8 comments: 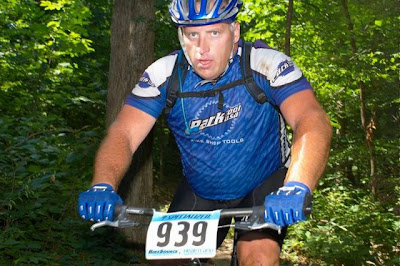 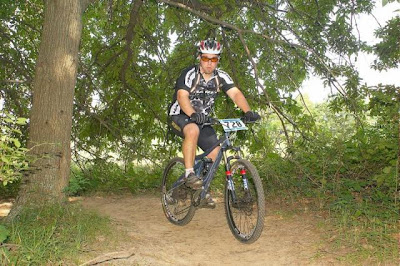 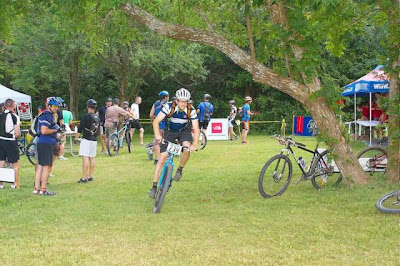 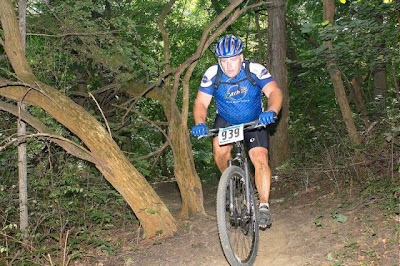 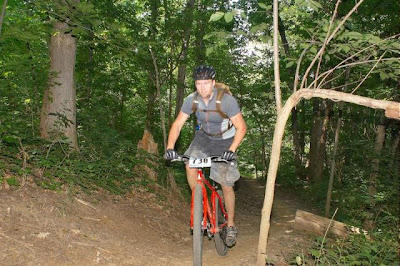 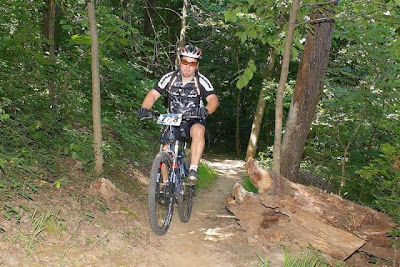 Props to Lansen and Shaun for showin us how to do it on Saturday. I was cryin like a little girl about how much I was cramping (prob meunstral) and just generally whining like a bitch when Shaun came in after doing 5 laps to my 4 and all he really had to say was that he was hungry! He did Bogart 4 of the pb&j sandwiches beforehand however. I bet this was the reason for his 38th bowel movement of the day coming back through Platte City that night. Lansen did great again, but I think the BB5's held him back. He said something about flats, but we all know the truth about the performance loss of having mechanical disc brakes that only adjust on one side! It was a great time for all of us and I'm glad I went. Winning those inner tubes was well worth the extra 20 bones in the raffle.

Some scoundrel has been doing some weedeating and chainsaw work on the 1st part of GSC recently, and did a helluva job. Props to that person or people...you know who you are.

I'll be weedeating Corby South from 7am to 10am on Sat morning and till noon on Sunday if it doesn't get done Sat. Shaun has 2 working weedeaters that are available and that sling the heavy string. Someone can walk with a blower even if they want to. Peace, RT
Posted by Clyde s Dale at 7:48 PM No comments:

A good name for this event.

Randy, Brad, Shawn, Jason, and I all headed down south for the race. We all did the 6 hour solo. The weather was perfect for racing, dry and relatively cool for this time of year.

There were more flat tires on this race than any other I had ever seen. 3 for me during the race, one during the last lap. Even still, I felt pretty good the whole time; except for the last part of the last lap when I ran out of food and water and had to limp it in. Finished off 6 laps before it was all over, and felt okay about that.

Gotta rip out a big thanks to Shawn and Forces of Nature for keeping us all running during that race. I think nearly every one of us had at least one flat during the race. I would have been out for sure if Shawn wouldn't have been fully stocked and handing out supplies.

Afterward we all hung out for a bit and watched Randy win hundreds of dollars in raffle prizes. Gotta say a big thanks to the Heartland Race guys. Those guys really know how to put on a good race - and a nice event. I think everyone there had a good time. As always, it was a smooth running, professional, and still light hearted event. Also want to throw out some props to the Earth Riders. Nice job keeping those trails in awesome riding condition.

So anyway, I feel like I have a new respect for Landahl. I also have a helluva respect for the guys doing the solo 12 hour event. With how sore my ass was after 6, I don't even want to think of what 12 would have done on those rocky trails. However, I would like to think that I would be riding something other than a full rigid single speed in a 12 hour event...
Posted by Lansen at 8:12 PM 6 comments:

trail tours and stuff and wood 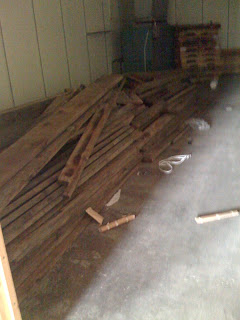 Well I'm back from touring/fixing house for new wife. It is time to hit it hard on trails/bridges and get ready for the trail tour. New GPS maps would be great to help with people wanting to look at our trails before they come up. I need volenters to lead the trail tours both days. Please give me your input on how we should proceed on organizing this event. We are thinking about doing camping around Noise school in the field we want to make it a festive atmosphere with lots to do. I have wood lots of wood especially in my back room that i would like to get rid of. We have lots of bridge material that needs to be used lets set a trail day or two to get all this wood out of here.
Posted by shawncforce at 10:10 AM 3 comments:

Will someone please GPS the GSC

I have some heavy f'in planks for the bridges-2-b at the GSC and don't want to have to carry them any further than needed, as they weigh more than some riders I know. I'm still not quite sure in my mind which ravine leads where, when up top on the sidewalk. The planks are just too damn heavy to be moving any way other than downhill. If anyone has a burro or any other load-bearing animal out there holler. I was thinking that I heard that the gps thing was done but not yet downloaded. We be needing to get that done so the bridges can be ready by the September tour and guided rides. It also just needs to be done...you know it and I know it. And for chrissakes will somebody clear out the spiders?! I just go through, knock em down, and they come back twice as thick and strong. See what you can do. RT
Posted by Clyde s Dale at 10:42 AM 5 comments: 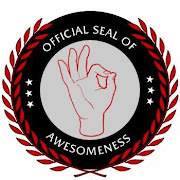 No nuts NO Glory!!